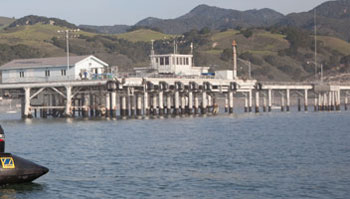 SAN LUIS OBISPO -- On the morning of March 11, a surge of water from the earthquake that struck Japan reached the Cal Poly Center for Coastal Marine Sciences’ Pier. Though the pier itself was ordered evacuated as a precaution, its instruments continued to record data.

Center scientists were able to monitor what happened in Avila Beach as well Morro Bay, another site where Cal Poly maintains an extensive array of equipment for ocean monitoring.  The observatory in Morro Bay is maintained by the Center’s SLOSEA program (San Luis Obispo Science and Ecosystem Alliance).

“We saw swings of almost 8 feet in tidal height within very short periods of time -- about 15 minutes,” explained SLOSEA Director Dean Wendt, a biology professor and associate dean of Cal Poly’s College of Science and Mathematics. “This volume of water movement would normally be seen under our most extreme tides and over a six-hour period.”

“We are fortunate that its arrival coincided with low tide.  Had it arrived even a few hours later, we would have seen a much larger impact to our coastal towns and communities,” he explained.

In just a few hours, the Morro Bay ecosystem underwent as many high and low tides as it does normally during five or more days. The same effect was seen in Avila Beach, at the Center for Coastal Marine Sciences’ Pier.

“The water level varied between two to three feet, but instead of taking six hours, like a normal tide, the water level did that several times within a half-hour,” explained Cal Poly Senior Research Scientist Brian Zelenke. “We saw the equivalent of five or six tides within a 30-minute period.”

The Cal Poly Pier did not sustain any damage, in contrast to the destruction the tsunami brought elsewhere. “We send our thoughts and prayers to the people of Japan and other coastal communities around the Pacific during this period of incredible tragedy and loss,” Wendt said.

For more about SLOSEA monitoring and research, as well as a news interview with Zelenke, please see the program’s web site.