A Particle of History 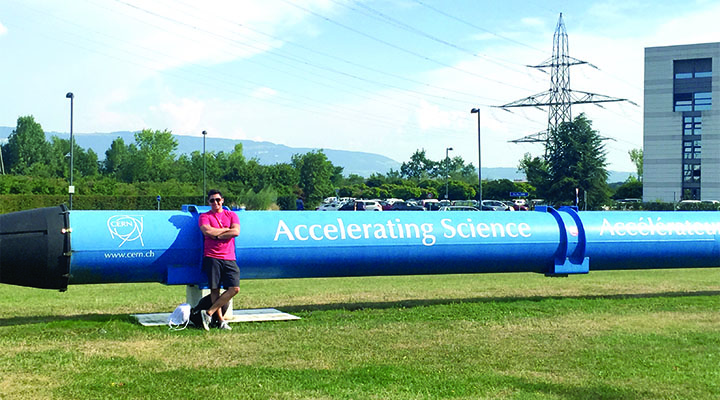 Physics student Austin Guard in front of one of the 1,232 superconducting dipole magnets that steer the particle beams of the Large Hadron Collider at CERN in Geneva, Switzerland.

One football field beneath the surface of the Earth in Geneva, Switzerland, in a 27-kilometer tube that’s colder than outer space, particles crash into each other at nearly the speed of light. A billion times every second.

By 2026, the number of collisions will increase 5 to 10 times, and Cal Poly students will help make it happen.

These collisions take place in the Large Hadron Collider (LHC), the most powerful particle accelerator ever built. When the protons or ions collide, they can produce previously unknown particles that provide insights into the fundamental workings of the universe.

Scientists are upgrading the LHC to increase the number of collisions, which will allow them to learn about the universe in greater detail. The improved accelerator, the High-Luminosity LHC, will contain a good amount of Cal Poly Learn by Doing. 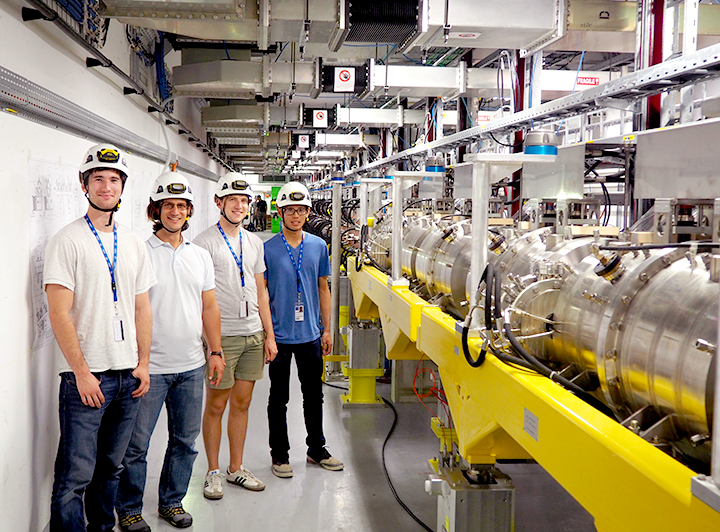 “I answer the phone when the physicists call 1-800-more-protons,” said Themis Mastoridis, a physics professor.

Mastoridis and his students play a key role in the upgrade. Using computer models, the research team investigates possible changes to the accelerating systems, which are the engine of the LHC. These systems provide the energy needed to accelerate the particles close to the speed of light.

Physics major Ben Miller spent a week at CERN during the summer observing testing on the system he’s been modeling.

“I had the opportunity to sit in a meeting with some of the top people who had designed the major systems in the LHC, and they were talking about the work I had been doing,” Miller said. “It was a humbling experience but also made me feel like I had contributed something meaningful.”

IT’S INCREDIBLY EXCITING AND ALSO FRIGHTENING. IF OUR DETECTOR WORKS, IT ENABLES ALL OF THE PHYSICS. IF IT DOESN’T — LET’S JUST SAY THERE’S NO ROOM FOR ERROR.

Only a few of the billions of particles created every second in the LHC are rare enough to interest scientists. Instruments called detectors have a few trillionths of a second to decide whether a collision might contain one of the rare — and therefore scientifically important — particles and, if so, record the particle’s properties.

Cal Poly students are building a new detector for the ALICE experiment, which investigates how the universe formed right after the Big Bang.

“It’s incredibly exciting and also frightening,” said physics Professor Jennifer Klay, who works on ALICE and oversees the instrument’s construction. “If our detector works, it enables all of the physics. If it doesn’t — let’s just say there’s no room for error.” 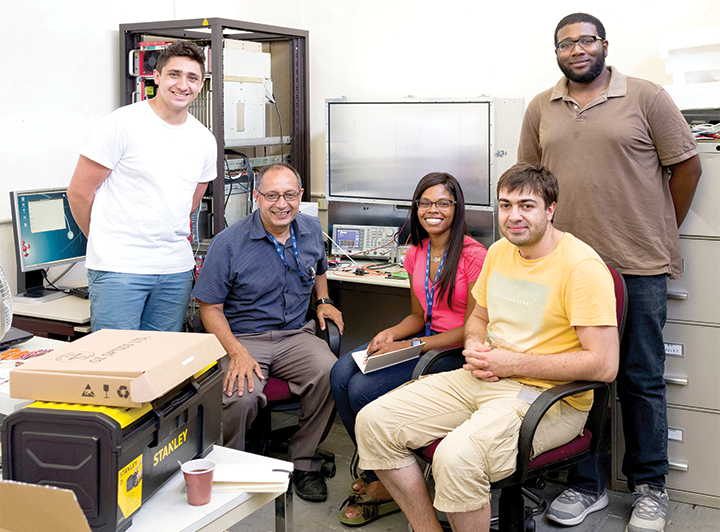 Austin Guard with a group of international collaborators
at CERN in front of the ALICE Fast Interaction
Trigger detector test stand.

That means a lot of precise testing is needed. Physics student Austin Guard traveled to CERN last summer to help operate the current detector. While there, he worked with a technician from Russia to construct a test stand for the upgraded version he’s helping to build. Guard, Klay and the rest of the team will reconstruct the test stand at Cal Poly to test their work.

“Austin got to run the trigger system at CERN, the very system he’s working to upgrade,” Klay said. “He got valuable international experience and gained a unique skill set that’s a tremendous résumé-builder.”

Wherever Guard and Miller find themselves in 2021 when the High-Luminosity LHC turns on for the first time, they’ll know they’ve helped make history.