An LC-130 prepares to take off from the ice runway at McMurdo Station, transporting the research team and fresh food to the South Pole. Photos courtesy of Lesley Anderson.

As a member of the PolarTrec program, which pairs teachers with a research team in Antarctica, Anderson shared every step of her journey to the bottom of the world with her students, from trying on parkas and boots to speaking with them live from McMurdo Station.

I’VE HAD GIRLS TELL ME, 'I DIDN’T KNOW GIRLS CAN DO THAT IN SCIENCE.' IT’S BEEN INSPIRING TO SEE THEM CHANGE THEIR PERSPECTIVE.

Anderson teaches at High Tech High in Chula Vista, California, a high-needs, Title I school. Many of her students have never left the city where they were born.

Anderson’s research career began as an undergraduate at Cal Poly studying the home range of rattlesnakes and the mating habits of fish. Her passion for incorporating this real-world research into her teaching was piqued when she participated in the in the California State University's Science Teacher and Researcher (STAR) Program, which Cal Poly leads.

“The STAR Program completely changed how I think about teaching,” Anderson said. “When kids see someone who has done research, it makes science much more tangible to them. I've had girls tell me, 'I didn't know girls can do that in science.' It's been inspiring to see them change their perspective." 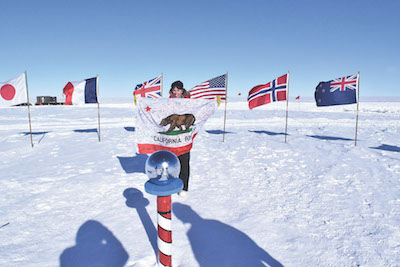 STAR also kicked off her interest in frigid climates, giving her the opportunity to spend two summers at NASA’s Jet Propulsion Laboratory doing research on arctic climate change. The experience helped her land a spot with PolarTrec on her first try.

When Anderson returned home to Chula Vista, she discovered just how much her trip had inspired her students. 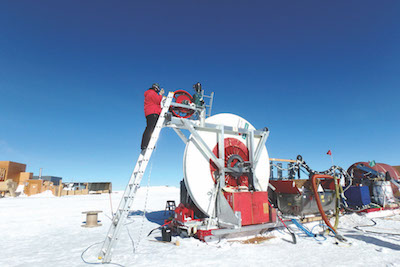 The Askaryan Radio Array drilling team assembles
the final working pieces of the hot water drill that
will create 200 meter holes in the ice to deploy
radio antennas.

“A handful of students are interested in applying to their own Arctic or Antarctic expedition. It’s been exciting to watch the passion from young high school kids wanting to become scientists,” she said.

The students enjoyed it so much that they convinced Anderson to visit all seven continents in 2018. They even helped her plan her trip to her seventh and final continent, South America.

Anderson continues to be an explorer in her teaching. Her students are currently partnering with Rising Tide Conservation to turn her classroom into a working aquarium laboratory, bringing her research full circle, back to those first studies of mating fish.

Read more about Cal Poly in Growing Up on the Ice