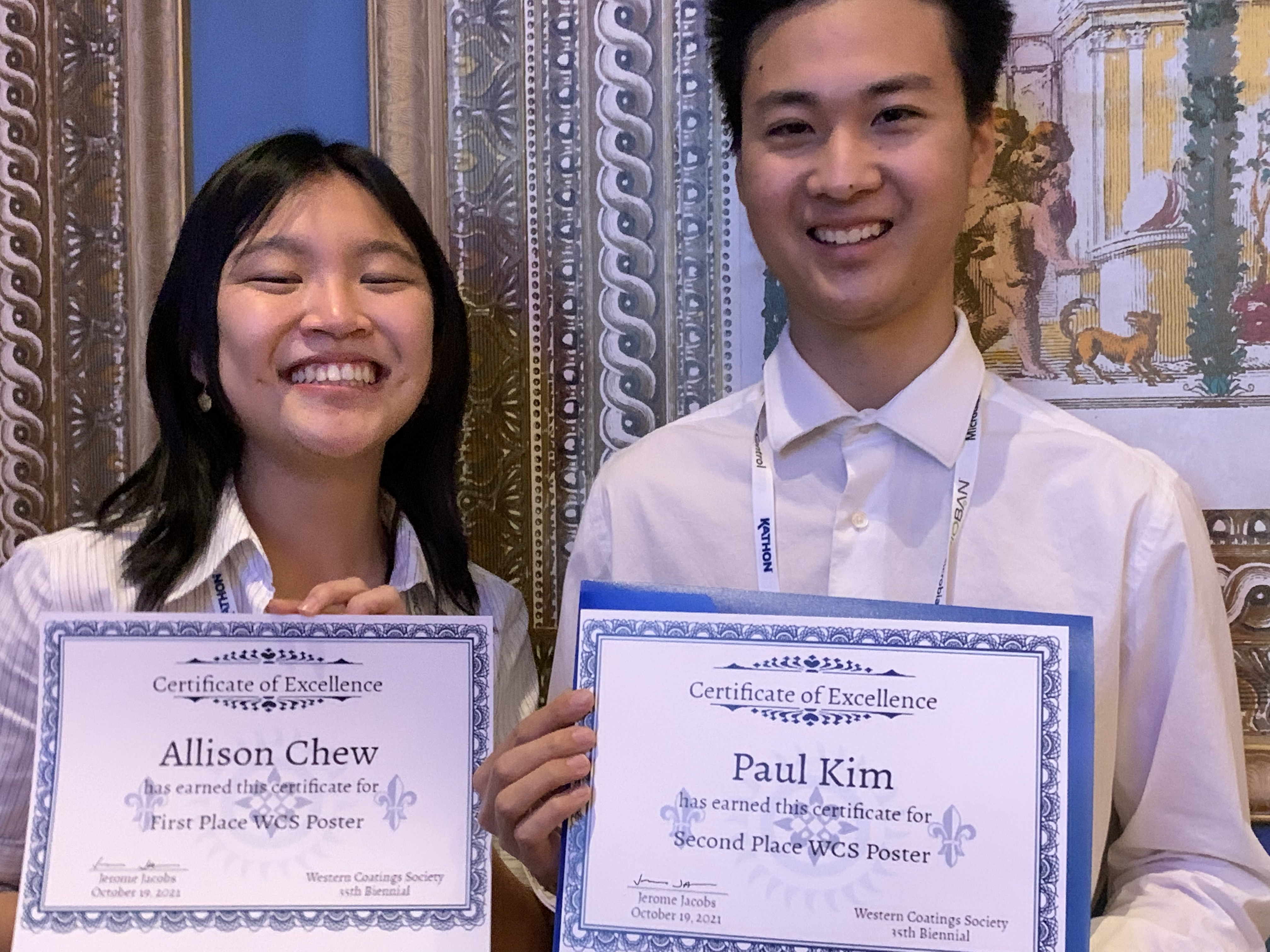 Students and faculty in Cal Poly’s Polymers and Coatings Program took top honors at the biannual Western Coatings Symposium and Show, the premier event for the paint and coatings industry in the Western U.S.

Alison Chew, a materials engineering major, was awarded first prize in the student poster competition for her work on the synthesis and characterization of porous sponge-like polymers. Chew’s work will contribute to the use of these polymers in the purification of water.

“Alison has excelled in the lab this past year working on an interdisciplinary project combining chemistry and materials engineering, taking on a leadership role,” said Leslie Hamachi, a chemistry professor and Chew’s faculty advisor. “It’s such an important experience for student researchers to present their work to the scientific community, and this award demonstrates Alison’s in-depth knowledge of all aspects of the project gained through our commitment to Learn by Doing here at Cal Poly.”

Chew plans to continue in the field and receive her master’s degree in polymers and coatings at Cal Poly.

“Attending the Western Coatings Symposium in person added a whole different dimension to presenting my research in person with the intensity of speaking to judges and interested industry scientists that I had never met before,” Chew said. “I also got very thoughtful, difficult questions from the judges and other attendees, which are notes that I’ll take into my future work on the project. I really appreciated being challenged in that way.”

“Doing research taught me a new way of thinking,” Kim said. “It taught me how to produce knowledge. I also learned skills that I was then able to apply and practice directly in the research process.”

Ray Fernando, director of Cal Poly’s Western Coatings Technology Center, was honored with the Samson-Adler Award, which recognizes lifetime service to the Western Coatings Society and the coatings industry. Fernando was celebrated for his research, mentorship, and service work. His research is wide-ranging and has led to four patents. It includes the chemistry behind how paints flow and how they are thickened. He has mentored more than 100 Cal Poly students, most of whom went on to jobs in the coatings industry.

Chemistry Professor Erik Sapper presented one of the keynote speeches at the conference. Sapper spoke on how technology, including machine learning, along with educational changes such as virtual and team-based learning are making the rate of development more rapid in the polymers and coatings field.