By the end of the year, one small corner of the universe will get really cold, and four Cal Poly physics majors helped finish construction of the instrument that will cool it down. 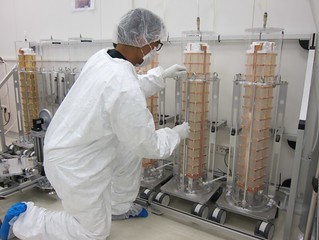 The CUORE collaboration is searching for an event so rare no one has ever seen it happen. The event — called neutrinoless double-beta decay — would help to explain why the universe is full of matter instead of antimatter.

To detect this event, 165 scientists and engineers from four countries built a complex detector and, in this final stage, the largest scientific refrigerator in the world. The refrigerator will drop the temperature of the detector almost to absolute zero — colder than outer space — in hopes of recording the tiny temperature change that this type of decay would produce.

“By being present at this milestone in the CUORE experiment, Cal Poly students witnessed a scientific achievement that had never been accomplished before. That’s an extremely valuable Learn by Doing experience,” said physics professor Tom Gutierrez, the students’ advisor.

Since 2007, the National Science Foundation has supported Gutierrez and his students’ participation in this work.