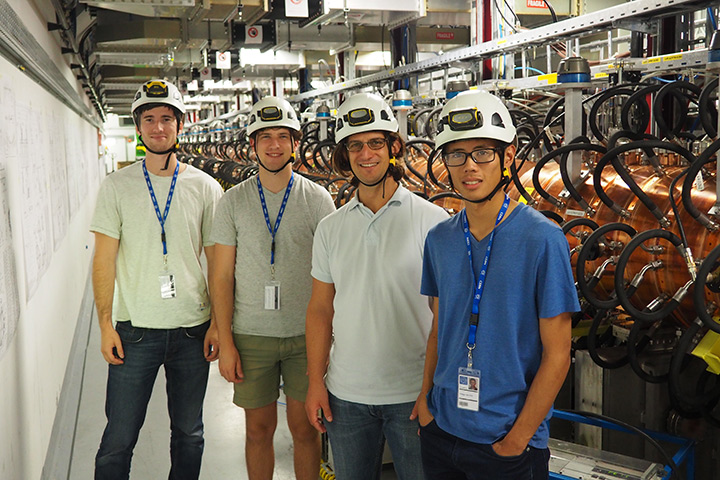 Physics Professor Themis Mastoridis has made a career out of causing collisions — on a very small scale. With a $750,000 Early Career Research Program grant from the Department of Energy, he and his student research team will play a key role in the coming upgrade of the world’s largest particle collider, the Large Hadron Collider (LHC).

Located at the European Organization for Nuclear Research, or CERN, in Geneva, Switzerland, the LHC speeds up particles until they are traveling almost at the speed of light and then crash the particles into each other. These collisions can generate previously unknown particles that provide insights into the fundamental workings of the universe. The discovery of the Higgs boson, for example, resulted from data collected from the LHC.

Using computer models, Mastoridis and his research team investigate possible changes to the accelerating systems, which are the engine of the LHC. These systems provide the energy needed to accelerate the particles close to the speed of light.
“In 2025, the High Luminosity LHC will come online with five to ten times more particle collisions per second,” Mastoridis said. “We’re helping to optimize multiple aspects of the accelerator to make that increase possible.”

The students who Mastoridis mentors experience the thrill of traveling to Geneva to work with an international team of scientists and see the results of their hard work firsthand.

“The visit to CERN has been exceptional for students,” Mastoridis said. “The scientific excitement there is palpable. It is really inspiring for students to see a group of scientists so dedicated to this common goal.”

Physics major Ben Miller spent a week at CERN observing testing on the system he’d previously known only through his computer models.

“It’s one thing to work on simulations at Cal Poly, but travelling to CERN and seeing the equipment I am simulating is a whole different experience,” Miller said. “I have been interested in physics and reading about CERN for a long time before I came to Cal Poly. Just being there and seeing the places where so much history has been made is such an incredible experience.”

With the new grant, Mastoridis will also bring his expertise to bear nationally. He will contribute to a new electron ion collider being built in the eastern U.S. and will help design a new light source for the SLAC National Accelerator Laboratory operated by Stanford University in Menlo Park, Calif.