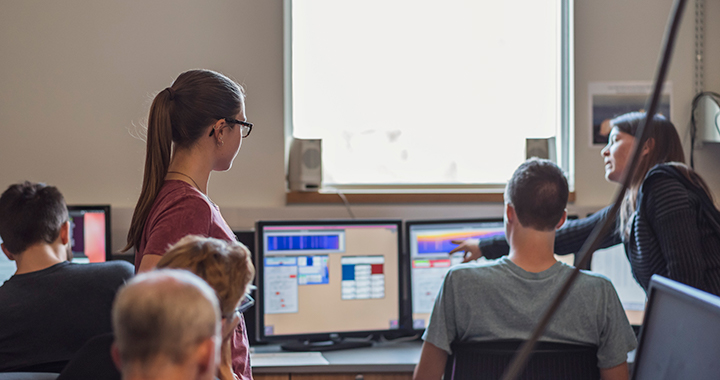 As sunset fell over the West Coast, the Shane three-meter telescope at the Lick Observatory — situated in the hills above San Jose — was being readied to peer deep into the night sky. Some 200 miles south, in a Cal Poly laboratory classroom, anticipation for what would be observed through the high-powered telescope grew.

Not a cloud in sight. It was the perfect night for stargazing.

From the comfort of the classroom on campus, physics majors Donald Loveland, Jake Haslemann and Marissa Dierkes and mechanical engineering major Maren Cosens helmed the Kast spectrograph, an instrument on the Shane telescope that maps the spectrum of light an object emits.

Just a few weeks earlier, the classroom had been furnished with a dedicated computer, three monitors and conferencing equipment that allows students to control the spectrograph remotely. A generous donation from professor emeritus Randy Knight made the remote control room possible.

The students were taking the new equipment for a test run ahead of almost 100 nights of observation time between April 2016 and May 2017. That night, they learned by viewing 12 active galaxies.

“What we’re looking at is the supermassive black hole at the center of the galaxy,” Cosens said. “We think there’s one in most galaxies. Some of them are active. So, material is actively falling into the black hole. As that material heats up in an accretion disk around the black hole, it emits a lot of light, which can be 10 to 100 times brighter than an entire galaxy.”

The spectrograph analyzes and records the wavelengths of the light emitted in the blue and red ranges. This provides researchers with data about the black hole as well as surrounding material. “We’re looking for variability in that, and we are targeting very massive black holes,” Cosens said. “That’s why we need this year-long period.” The goal is to determine a relationship, which would allow researchers in the future to determine the mass of any black hole from a single spectrum without having to undertake lengthy observation campaigns.

The observations provide real-world experience using sophisticated instrumentation. For Loveland, working in the remote laboratory makes him excited to visit the Lick Observatory in person — a dream that will become reality for him and three other students at the end of January.

But the remote set up serves a larger purpose, according to Vardha N. Bennert, a Cal Poly physics professor who served as project leader through several of the night observations.

“This keeps the students from having to miss two or three days of classes to visit the observatory,” said Bennert, who has coordinated research opportunities for students at the Lick Observatory in the past. The remote control room at Cal Poly also allows more students to get hands-on experience. “With this, I can reach out to a lot more students than I would be able to take to the observatory. It makes it much more possible for me to teach and conduct research at the same time.”

The observations are part of a larger collaboration with other institutions led by Professor Aaron Barth at the University of California, Irvine. The project has already resulted in two of the Cal Poly students co-authoring a paper describing the discovery of a supernova.