"Kevin brings important expertise and leadership in conducting key research and engaging local stakeholders in aquaculture, which will help position Cal Poly as a leader in this rapidly growing field. We are delighted to have him as part of our team!" says Benjamin Ruttenberg, Associate Professor and Director of the Cal Poly Center for Coastal Marine Sciences.

Johnson joins California Sea Grant’s statewide team of extension specialists who work with coastal communities, businesses, and policymakers to provide science-based information to support the state’s environment and economy. As an extension specialist, Johnson will conduct research and outreach on aquaculture in central California. In addition to his extension role, he will serve as a research scientist at Cal Poly, where he will also teach courses, mentor students, and collaborate with faculty at Cal Poly and aquaculture practitioners throughout the central California region. 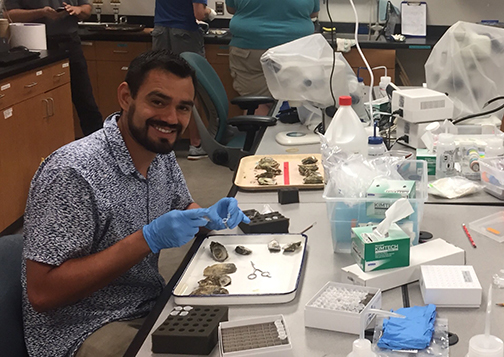 “One of the big questions in aquaculture is: What do these species require to reproduce? What do they need to have the next generation not only develop normally but also survive through harvest? We know that there’s a genetic component to survival but there is also evidence for an epigenetic component—how the environment changes how organisms use their genome,” says Johnson.

Johnson plans to focus his research program at Cal Poly on the effects of ocean acidification and deoxygenation on oysters and other native mollusks that have the potential to become aquaculture species. Changes in ocean chemistry can be especially hard on the early life history stages of organisms like clams and oysters that build their shells out of calcium carbonate. In addition, recent evidence has suggested that the conditions adults experience can have either a positive or negative effect on their offspring. Johnson plans to incorporate population genetic techniques in order to better understand how differences in an organism’s genome and conditioning may affect its ability to adapt—important information for both wildlife managers and aquaculture producers in California.

The new position brings Johnson full circle back to San Luis Obispo, where he started his academic career as a student at Cuesta College. Johnson then transferred to CSU Monterey Bay, where he completed his bachelor’s degree and took a first dive into applied coastal research, studying harmful algal blooms in California reservoirs.
Johnson then did a PhD at UC Santa Barbara, where he studied pteropods, a type of free-floating marine snail, and their response to ocean acidification and ocean warming. After completing his PhD, Johnson received a National Science Foundation fellowship to work at Louisiana State University. As a post-doctoral fellow, Johnson moved into aquaculture research, turning his attention to oyster development and the interplay of genetics and environment in development and survival. He also worked closely with the Louisiana Sea Grant oyster hatchery, and contributed to both local outreach and education programs.

“I’m really excited to be doing work that is really grounded in what is needed in the aquaculture community. I’m looking forward to working closely with farmers and hatchery managers to understand what their needs are and how we can address them,” said Johnson.

Johnson is also looking forward to working with community members and providing mentorship with hands-on research opportunities to students in the San Luis Obispo community.