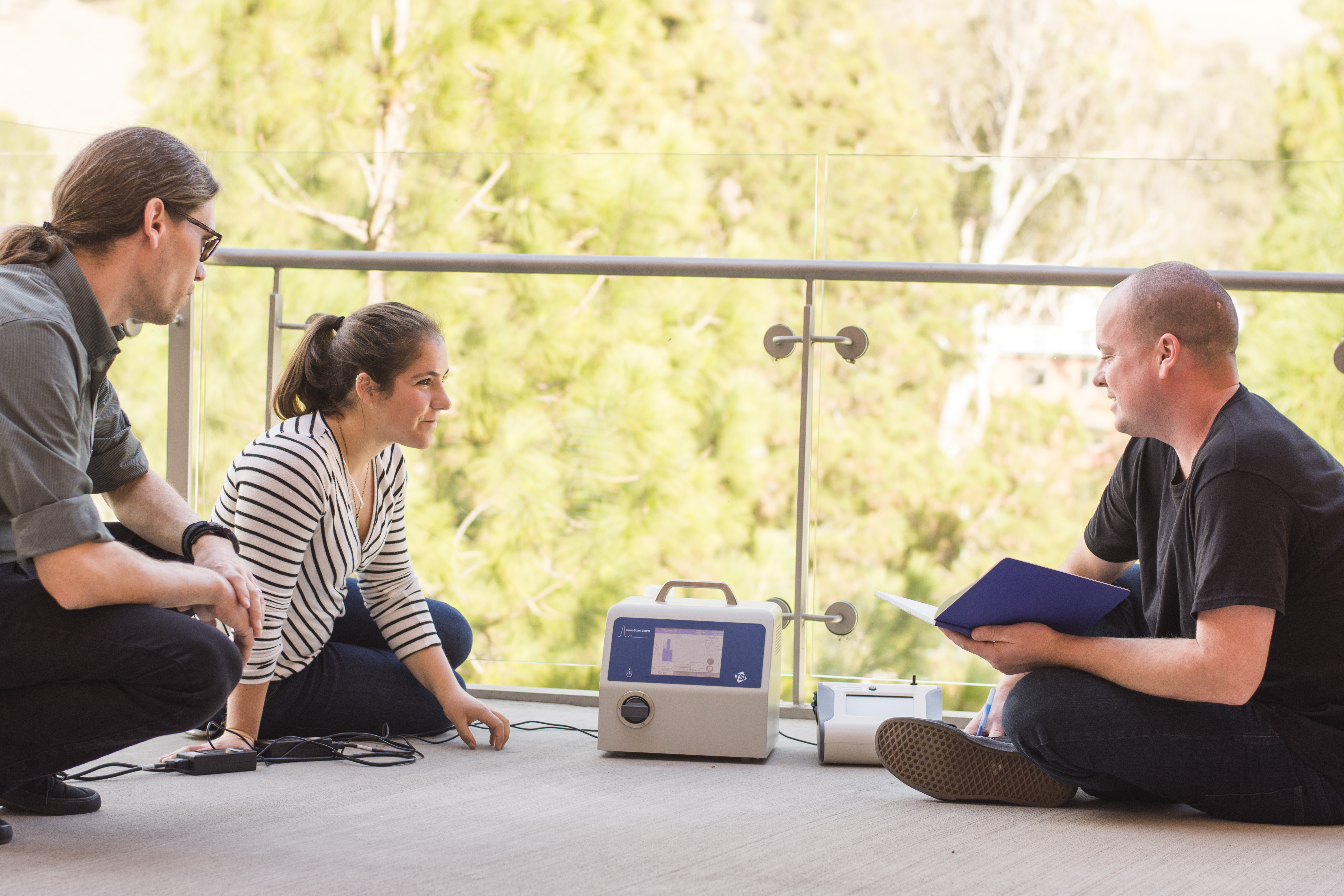 Matt Zoerb (far left) and his team pull air samples of wildfires
hundreds of miles away from the Cal Poly campus.

"2018 has definitely been a big year for fires," said Matt Zoerb, a chemistry professor at Cal Poly. "The Mendocino Complex Fire this summer was the largest in California history, and now the Camp Fire is both the most destructive and deadliest wildfire in our state's history."

The devastation of the wildfires in California was — and continues to be — felt across the state. The longer-term effects on our health and the environment, however, are more difficult to understand, and that's exactly what Zoerb and his team of Cal Poly student researchers are investigating.

"When something combusts, especially something that was once living, like a tree or a plant, there are a lot of gases that get emitted,” Zoerb said. “The chemical makeup of what's emitted can vary quite a bit, and that's one of our big focuses."

Governmental organizations such as Cal Fire and the Environmental Protection Agency do monitor air quality during a wildfire, but Zoerb and his team decided to take a microscopically closer look. Their focus? Tiny air particles known as "aerosol particles."

IF WE'RE ABLE TO DETECT THE IMPACTS OF A WILDFIRE, THEN THAT CAN HELP THE AGENCIES SUPPORT OR NOT SUPPORT CHANGING REGULATIONS THAT KEEP US HEALTHY

"We measure from 10 micrometers down to 10 nanometers,” Zoerb said. “At this size, we see a different perspective than most air quality monitoring stations.”

When something burns, whether it be a piece of wood or an entire building, the tiny particles released into the smoke often travel through the air for hundreds of miles. Despite being too tiny for the naked eye to see, these particles can make a big impact on climate and health.

Over the summer months, air samples were pulled from two places in San Luis Obispo County, the Cal Poly campus and the Cal Poly Pier, located at Avila Beach. While all three of the summer's wildfires — the Ferguson, Carr and Ranch River fires — were hundreds of miles away, both of Zoerb's lab stations picked up evidence of the materials that burned in each of the three fires.

These aerosol particles will attract other tiny molecules and they begin sticking together, not unlike a snowball effect in the sky. Over time, massive cloud formations can form, and according to Zoerb, this could "have long term impacts on the planet's energy balance."

And just as a fire's smoke influences the environment around us, it also affects the health of our body's internal environment. "Generally, inhalation of any high level of particulate matter can have negative health impacts," Zoerb explained. Though how the different things burned in a fire specifically impacts our health, is still largely unknown.

Of the samples already collected and analyzed by Cal Poly students, noticeable differences in their makeup have been discovered, suggesting a "fire fingerprint" may exist. And because the aftermath of a wildfire seldom leaves enough information, these clues could one day be used by health officials and governmental agencies to better understand how different wildfires are affecting our health and environment.

The more recent Campfire destroyed more structures and buildings than any previous fire in California. As Zoerb and his team of Cal Poly researchers recently set to work collecting the latest air samples, they anticipate noticeable differences in the chemical makeup of the most recent wildfire smoke.

As the prevalence of wildfire is expected to continue for California and the surrounding states, the Cal Poly research being will become increasingly valuable. "If we're able to detect the impacts of a wildfire, then that can help the agencies support or not support changing the regulations that keep us healthy,” Zoerb said.