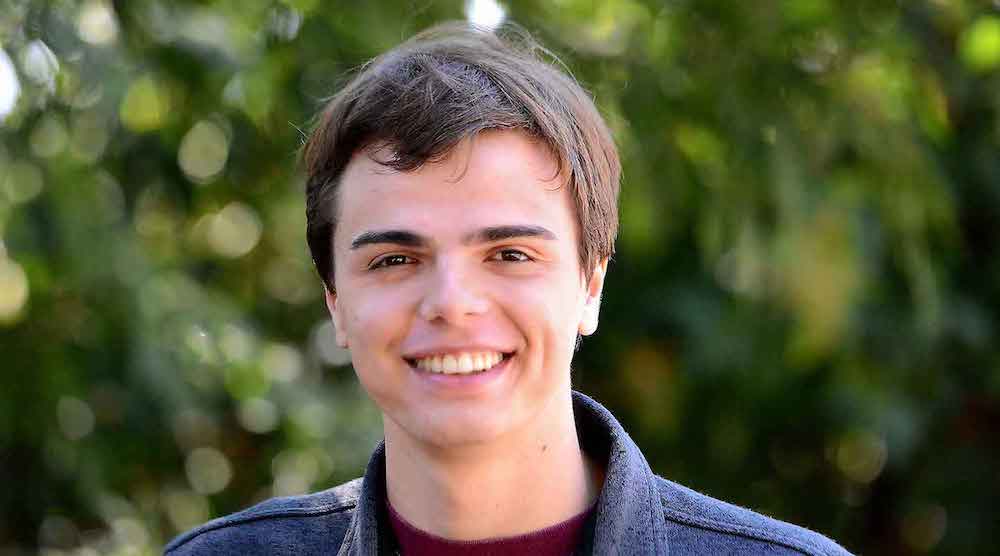 A Cal Poly biology junior who plans to pursue a career in emergency medicine has received a 2018 California State University Trustees’ Award for Outstanding Achievement.

The Outstanding Achievement Awards are presented annually to one student from each of the CSU system’s 23 campuses. David Denisov, 20, from Citrus Heights, Calif., like his counterparts throughout the state, was selected for superior academic performance, personal accomplishments, community service and financial need.

As part of the recognition, he will receive a $6,000 scholarship as one of the state’s William Randolph Hearst Scholars.

“I am certainly excited to receive this award,” he said. “It is an honor, and it gives me a sense of accomplishment. I feel that my struggles and persistence have paid off.”

He and the other awardees will be publicly recognized during the CSU Board of Trustees meeting in Long Beach on Tuesday, Sept. 11.

“These student scholars embody the leadership, diversity and academic excellence the California State University is known for,” said CSU Chancellor Timothy P. White. “They have traced unique paths to their goal of a higher education and serve as powerful examples to their families, communities and California. The awards will give these high-achieving and deserving students even more opportunities to attain their academic and career goals.”

Cal Poly President Jeffrey D. Armstrong was pleased to nominate the second-year biological sciences student in the College of Science and Mathematics.

“A child of immigrants, he comes from a large family that has faced both economic and personal challenges,” Armstrong said. “He has overcome these socio-economic disadvantages to be an exceptional and involved student at Cal Poly.”

The youngest of three siblings born in the U.S., and seven born in the former Soviet Union, Denisov said his family emigrated to America “due to religious persecution.”

“My parents were unable to completely integrate into American society, so raising a family in this country has been difficult,” he added. “I am the son of a recently widowed mother who raised 10 children on government assistance.”

While most siblings are successful, a few struggle with personal and medical issues.

“This scholarship relieves a huge burden off the shoulders of myself and my family,” the 20-year-old said. “It allows me to focus on my goal of attending medical school without piling up thousands of dollars in debt. To put it simply, I am able to put my education and overall well-being first.”

Denisov plans to graduate in June 2020.

Denisov said he was attracted to the university by its “climate and the personal attention to students based on smaller class sizes” — as well as its Learn by Doing reputation.

“Cal Poly has very talented professors,” Denisov added. “The work they do has been crucial to my academic success. Many professors truly show a dedication to the art of teaching. They do everything they can to help you achieve your goals and are quite selfless.”

The straight-A student volunteered at a senior living facility assisting senior residents and dementia patients, is a member of the American Medical Student Association, and has been involved in a behavioral research study, all with the aim of enhancing his knowledge of the field of biology and medicine.

Over the summer he volunteered in a clinical setting to shadow medical specialists to further his medical knowledge on his road to a medical career.

He joins more than 340 students honored with the Trustees’ Award since the scholarship program was established in 1984 by the William Randolph Hearst Foundation. In 1999, the foundation partnered with the CSU Board of Trustees to supplement the endowment with contributions from CSU Trustees, CSU Foundation Board of Governors and private donors. Each student scholarship bears the name of a donor.