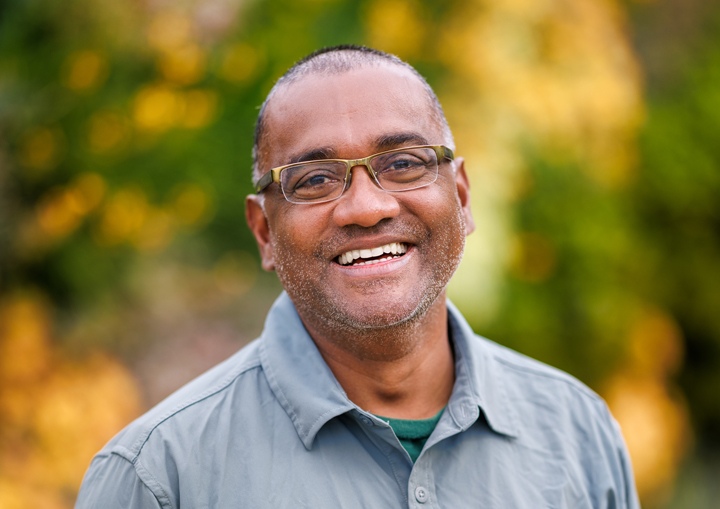 A Cal Poly biological sciences professor will conduct ecology research in South Africa as part of his second career Fulbright Scholar Award — as he urges Cal Poly faculty, staff and students to pursue the international award program for personal growth and academic opportunities.

Nishanta “Nishi” Rajakaruna, a global leader in the ecology of plants growing on serpentine rocks, will further his research on serpentine ecology during a 10-month sojourn in South Africa in 2022-23, where he’ll collaborate with students and scientists and give seminars throughout the country.

Fulbright is considered “the world’s largest and most diverse international educational exchange program,” offering 800 awards annually in more than 135 countries, according to its website.

It’s not his first visit to the rugged country on the southernmost tip of the continent, however.

He first went to there in 1999 to attend the (third) International Conference on Serpentine Ecology and returned in 2016 on a National Geographic Society-funded expedition where he discovered a new genus of lichen.

Rajakaruna earned his first Fulbright award in 2016-17, which involved research in his native Sri Lanka.

“I study plants that are growing on the edge, in harsh, extreme and stressful environments,” Rajakaruna said. “Just like those plants I study, I love putting myself in situations that are challenging, even stressful, because that is how I can learn more about myself and the world I call home.”

He added, “I hope Cal Poly students, faculty and staff pursue Fulbright awards or other international award opportunities to better understand ourselves and the world we call home, and our place in it.”

“I hope Cal Poly students, faculty and staff pursue Fulbright awards or other international award opportunities to better understand ourselves and the world we call home, and our place in it.”

Serpentine can be found across California and in South Africa, as well as along continental margins around the world. Rajakaruna’s graduate students are studying lichens along the Central Coast, making their own discoveries of the complex life form that is a symbiotic partnership of two separate organisms, a fungus and an alga.

Besides the olive-green rock’s interest to geologists and botanists, serpentine often is used to make jewelry and to construct decorative buildings such as cathedrals.

High concentrations of heavy metals such as nickel found in serpentine soil create a toxic environment that tends to deter plant growth. Rajakaruna is interested in understanding how certain plants evolve in this unwelcoming earth, and how those plants might be used to clean up metal-contaminated areas worldwide.

Siebert, the curator of the NWU’s A. P. Goossens Herbarium, with over 30,000 specimens for educational and research purposes, will be Rajakaruna’s host during his Fulbright.

“I always tell students that science is not just the research that happens in a lab or in the field,” Rajakaruna said. “There are people behind the science and building close relationships with those you work with is really important.” 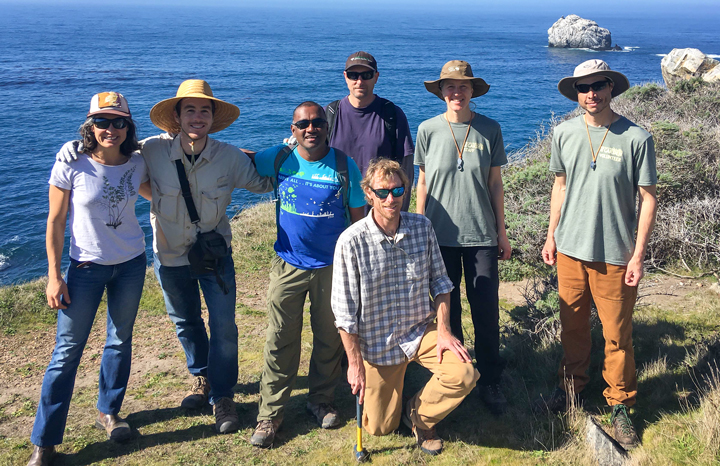 Rajakaruna added, “Much of my academic story is a story of networking, building close associations with colleagues and students alike. I have published with researchers and students from 24 countries, and I consider all my co-authors my friends.”

Siebert said that as conference roommates they shared a fondness for cricket and Amarula Cream Liqueur. And the Fulbright will help grow their professional bond as well as reconnecting as friends.

“We have been hoping for an opportunity like this to strengthen our collaboration, so you can imagine we are very excited to host him for a whole year,” Siebert said. “He is not only a leading scientist in his field, but also very passionate about plants and easily shares that excitement for botany with young students.”

Rajakaruna plans to pursue research in understudied areas of serpentine geoecology — how climate influences vascular plant, bryophyte and lichen diversity on serpentines of the region — and include South African students in all his research efforts, as well as a familiar face: Cal Poly biological sciences senior TJ Samojedny, who will join Rajakaruna at the end of the year.

“It’s all about building capacity and sharing whatever I am able to share with the next generation of environmental scientists,” Rajakaruna said.

Rajakaruna will also use X-ray fluorescence technology to screen large numbers of herbarium specimens to discover nickel hyperaccumulating plants (which concentrate particular metals in their living tissues). These plants can be used for soil restoration as well as for mining metals from soil.

Rajakaruna has served as a faculty-in-residence at Cal Poly for four years, where he has lived in the yakʔitʸutʸu residential community, and envisions developing a similar program at NWU. 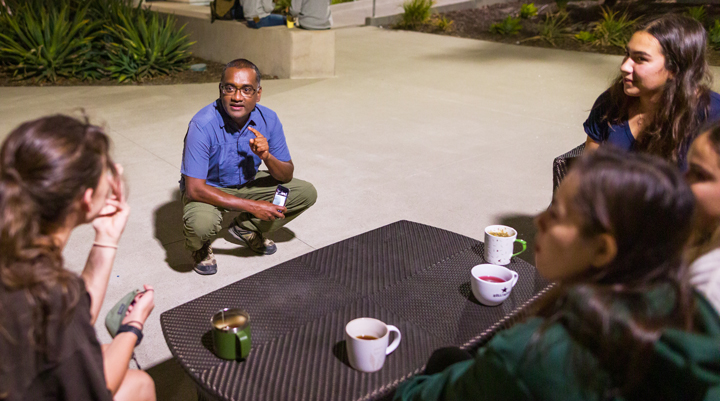 He plans to visit high schools in South Africa to share his story and inspire Africans to consider attending university in the U.S. as he did. At age 20 he pursued his interest in botany at the College of the Atlantic in Bar Harbor, Maine.

“If you tell people your story, that’s the beginning of them realizing or imagining what their story might be,” said Rajakaruna, whose father, a professor in Sri Lanka, earned just a few hundred dollars per month in 1990.

Nishi found a way to pay for his college education.

“As a naturalized citizen, I’ve greatly benefitted from what America has had to offer,” Rajakaruna said. “Coming to America was quite a change, but I knew I had the tools to thrive, and I now want to give back by sharing my experiences with those aspiring to study and work in America.”

Rajakaruna hopes to foster ongoing academic exchange opportunities between NWU and Cal Poly. That fits with Fulbright’s mission of enhancing “mutual understanding between citizens of the United States and the people of other countries,” according to its website.

Rajakaruna encourages Cal Poly students to apply for Fulbright Student Awards through the Fulbright U.S. Student Program, which offers grant funds and benefits. He said that not only are the awards prestigious, they can give students a wonderful way to spend a gap year while they decide on their future professional endeavors.

“A Fulbright is a great way to experience the world and immerse yourself in a novel setting that will help you learn more about yourself and your place in the world,” he said. 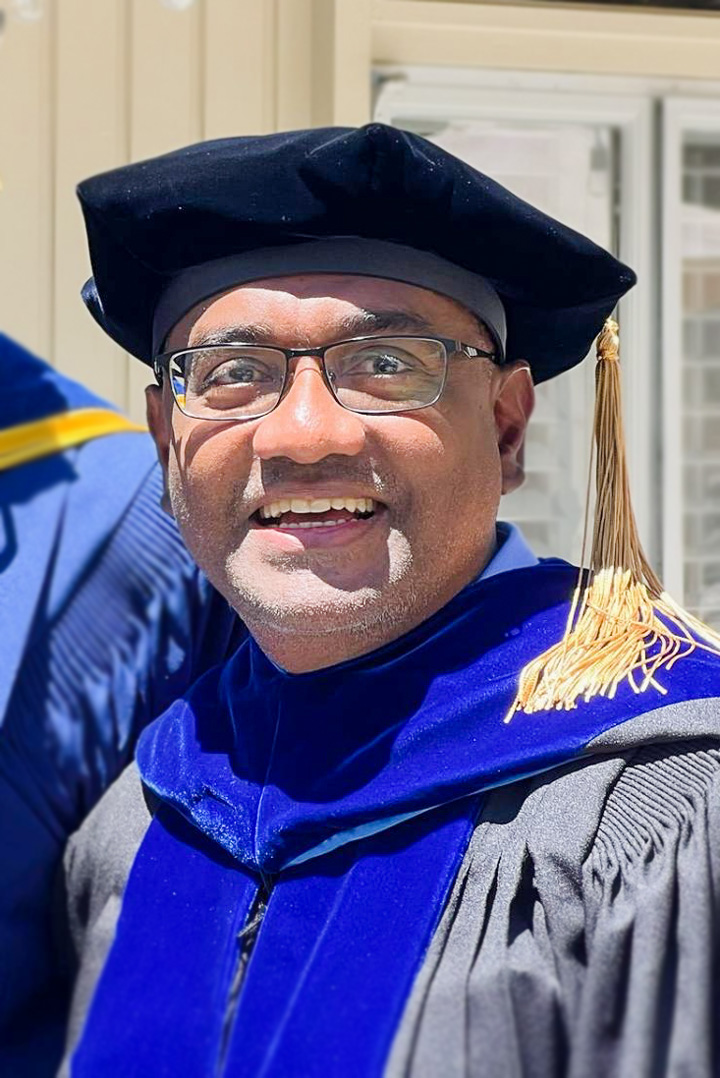 Nishanta “Nishi” Rajakaruna will be honored this fall with two of Cal Poly’s highest faculty honors for the 2021-22 academic year: the Distinguished Teaching and Distinguished Scholarship awards.

The biological sciences professor is the first faculty member to receive both in the same year.

“There are a few faculty members who have received both, but not in the same year,” said Sarah Best, office coordinator for the Cal Poly Academic Senate.

Read about other recent Fulbright Scholar awardees at Cal Poly.