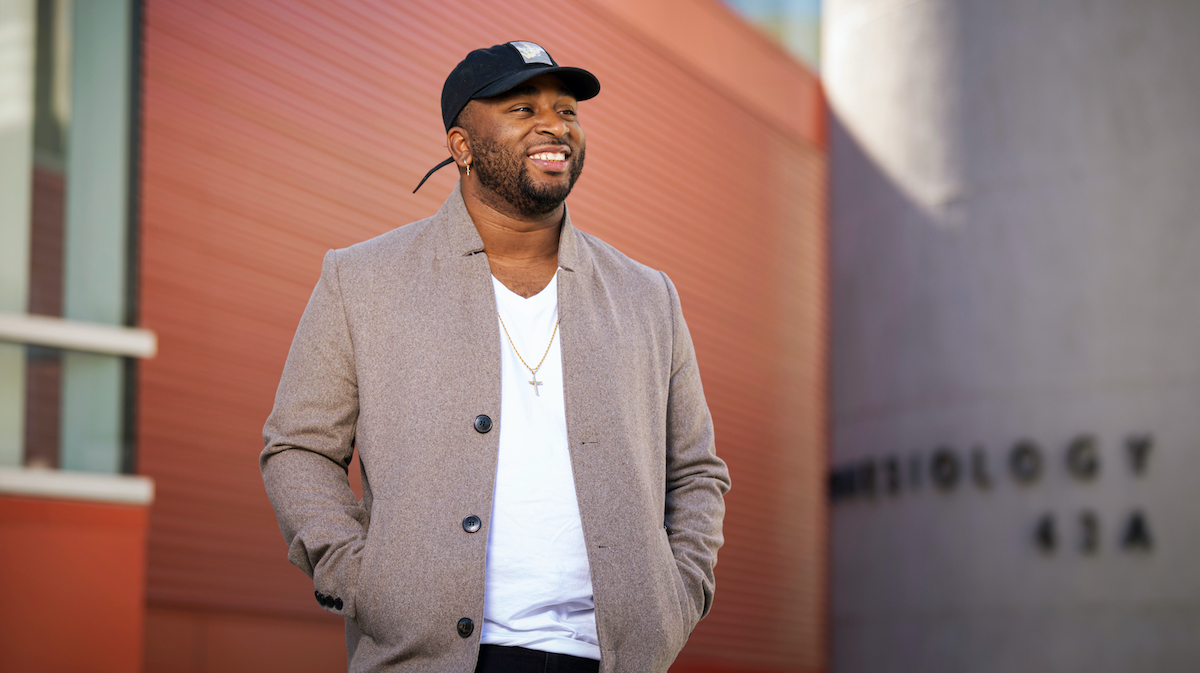 It’s 218 miles from East Oakland to San Luis Obispo, but for kinesiology alumnus and future chiropractor Dave Douglas, it might as well have been another country.

“When I came to SLO, it was a complete culture shock,” Douglas said. “Yo, where am I at? People leave their doors unlocked, walk around without socks. I use a lot of slang in my vocabulary, so I struggled with communicating, actually talking to people.”

Douglas initially saw himself only the way many others did — as a standout football safety. On the field, he was in familiar territory and knew how to excel.

In classes, on the other hand, all the unfamiliar cultural challenges made it difficult to focus on the actual courses. In Oakland, most people looked like him and spoke the same way he did. At Cal Poly, everything about him stood out, which made him feel like an outcast.

On top of that, he hadn’t expected to be challenged academically. “All I wanted to do was play football,” Douglas said. “What they (people back home) told me was, ‘Oh son, you can take a bunch of PE classes and spend most of your time focusing on football.’ I had no idea that once I started school I’d be taking classes such as zoology. I’m in cadaver labs, anatomy. No lie, this is hard.”

DAVE IS ONE OF THE STRONGEST, KINDEST, MOST EMPATHETIC HUMAN BEINGS I’VE EVER KNOWN.

After struggling academically for a couple of years, Douglas began to feel more comfortable on the Central Coast. With supportive friends in the residence halls and encouragement from former Cal Poly assistant coach Aristotle Thompson, he relaxed. The environment started to feel less threatening.

He was upping his game in class when two events derailed him.
His father, who served as Douglas’ bedrock, contracted an illness that would prove fatal. And he found out he was going to become a father himself.

“When Dad fell ill, that took me on my downward spiral,” Douglas said. “I was consistently taking trips to Oakland towards the end of my academic and athletic career. When my fiancé got pregnant, I thought OK, the only thing that’s going to make everyone happy is if I make it to the NFL. So I prioritized football over school, ultimately leading back down that slippery slope of a hill.”

Douglas’ dad died soon after, and he left Cal Poly a few units short of graduating. Two kinesiology professors, Camille O’Bryant and Kellie Hall, tried to talk him into returning, but with two kids to support, he couldn’t see how college fit into the picture, especially not four hours from home.

Douglas’ rebound came two years later when his fiancé landed a better job. Because O’Bryant and Hall had tried to stay in contact with him, he took the risk of reaching out to them after a long silence.

“With open arms, they didn’t hesitate or blink to say, ‘Yes! Let’s get this done.’ Camille and Kellie Hall are the reason I’m here and doing anything with my life.”
With football off of the table, Douglas was searching for direction in his life. O’Bryant recommended Life Chiropractic College West in Hayward, California, near Oakland, which seemed to be a good fit for him. 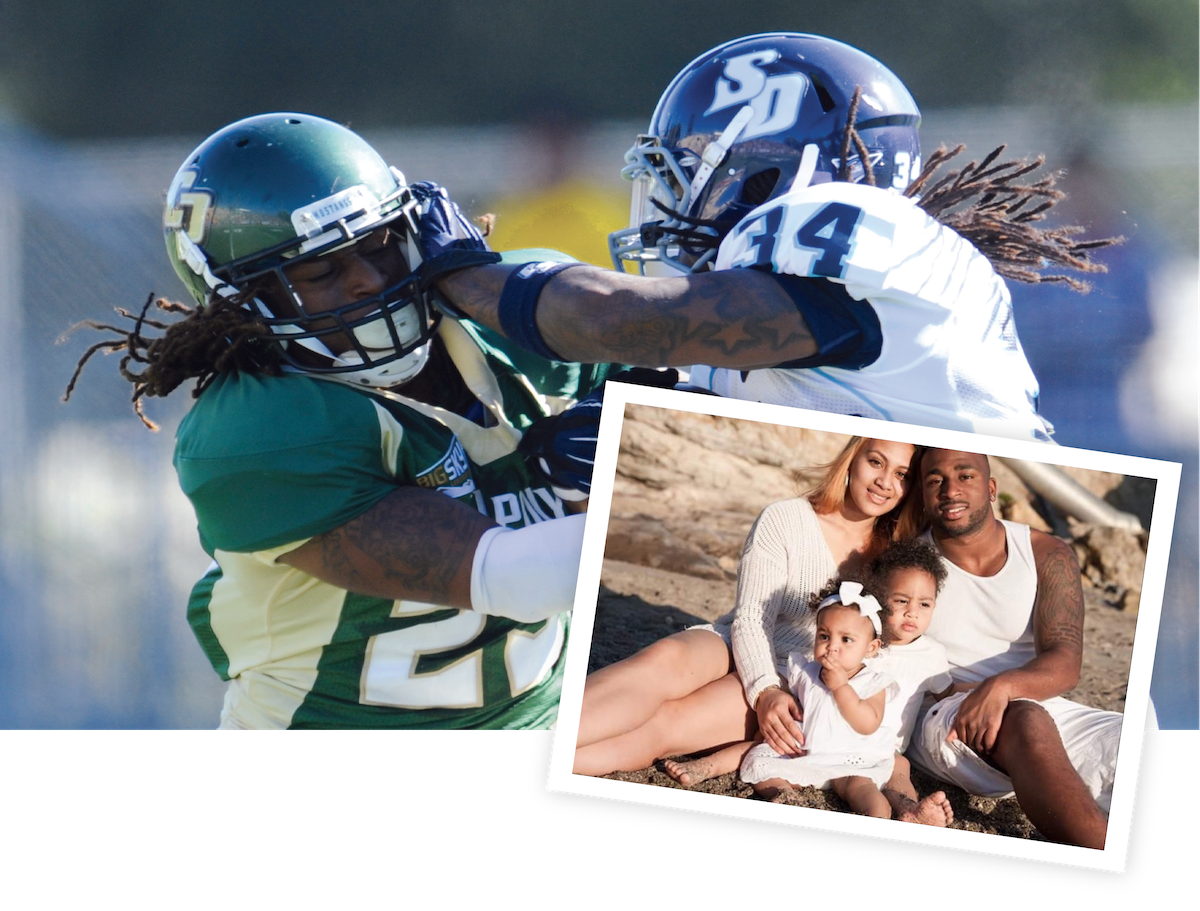 “Dave is one of the strongest, kindest, most empathetic human beings I’ve ever known,” O’Bryant said. “When I think of Dave Douglas, I think he’ll give you the shirt off his back. Talented, creative, very bright, but stuck sometimes in an environment that didn’t allow him to show his brilliance. That’s why I could see him as a healer.”

Now entering his third year, Douglas is excelling in his chiropractic studies. He represented Life West at an international chiropractic speaking competition in 2019.

To succeed in chiropractic school, Douglas draws on all he learned at Cal Poly as a student and as an athlete. The academic rigor that challenged Douglas early in his college career has been a benefit in his new field.

“Dealing with basic anatomy here (at Cal Poly) bumped me ahead of many of my classmates,” he said. “The xiphoid of the sternum? I know where that is. The clavicle? Come on, I know what that is also. And the course load that was here — I have never seen anything like it before. It made me work on my study habits.”

NOW, I’M DAVE DOUGLAS, A CHIROPRACTOR. AND I PLAN ON BEING THE BEST HEALER THAT THIS WORLD HAS EVER SEEN, THEREFORE I’M GOING TO BRING IT EVERY DAY.

The confidence and determination that served him so well on the gridiron have also carried over, and he brings a competitive edge to his chiropractic studies.

The philosophy behind chiropractic is to deal with the cause of illness or disease. Douglas is using this idea to work with the community of East Oakland and help children think more broadly about their future.

“I’m able to talk to the youth and the misled teens and tell them, 'Yo, there’s other options out there for us,' ” he said. 'You gotta have a plan B. Don’t put all your eggs in football, basketball or something like that. You don’t have to play sports, sell drugs or join gangs. Regardless of what our community tells us, there are many occupations outside our stereotypical realm.'

“Camille and Kellie supporting me has opened the door for me to influence hundreds of kids that I talked to. They have shed light in the darkness of my community in the city of Oakland. I can’t thank them enough.”

Read more about Healthy Bodies in Be Well, Anatomy of a Discovery and Math is Good For You