Return of the Pismo Clams 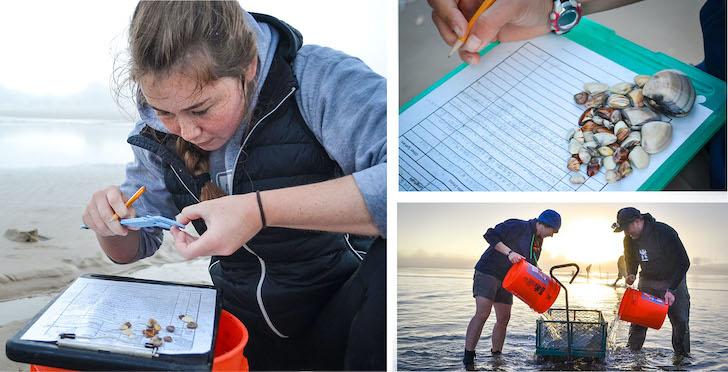 Cal Poly faculty, students and volunteers create the first and most comprehensive survey of Pismo clams on record.

Accessing sometimes remote beaches in the middle of the night, wearing sandy rain boots and waders, and witnessing legendary California sunrises and sunsets is all in a day’s work for Cal Poly researchers doing their part to restore an iconic species and contribute to a healthy local ecosystem.

In the last few years, the Pismo clam started showing up on its namesake beach in much higher numbers than had been seen in the last couple of decades – and no one knows why. Cal Poly faculty, students and 130 volunteers surveyed nearly 40 sites in California over a two-year period to create the first and most comprehensive survey of Pismo clams on record.

“This is the first time anyone has evaluated the status of Pismo clam populations across California,” said Ben Ruttenberg, biological sciences professor and director of the Cal Poly Center for Coastal Marine Sciences.

Funded by the City of Pismo Beach, the research is focused on the life history of these organisms and learning what they need to survive in their environment.

“With life history, we are looking mostly at how quickly they grow, what time of year they reproduce and how that relates to their overall body condition through time,” said Alex Marquardt, the biological sciences graduate student leading the project.

With this data, researchers hope to answer a number of questions. Why did the clams return? Will they eventually grow to a size that is legal to harvest? And could the population ever recover to the levels recorded in the first half of the 20th century?

“We’re trying to understand, specifically with regards to reproduction, what is it in the environment that may be driving the patterns that we see?” Marquardt said. 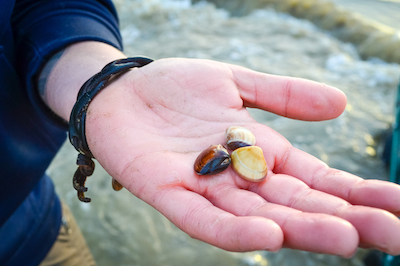 Traditional wisdom suggests that the Pismo clam population declined because of over-harvesting by humans and over-predation by otters. The data collected by Marquardt and her team of undergraduate researchers, however, suggests that a much more complex set of factors may have affected the species.

“If we want to restore the population of Pismo clams, we must first understand what factors contributed to the population decline,” Ruttenberg said. “Currently, we have data to suggest that the size of sand grains is critically important to where Pismo clams live.”

The research team will continue its study to get a fuller picture of how the species interacts with its environment. The hoped-for return of high numbers of full-grown clams could lead to clearer waters and reduced algal blooms thanks to the clams filtering the water as they feed — not to mention humans with shovels and buckets hunting for dinner on Pismo Beach.

Read more about Healthy Environments in Piering into the Ocean’s pH, Are You Thinking Big Enough? and Harnessing the sun to cook—and cool—in Africa