From Deep Sky to Deep Respect 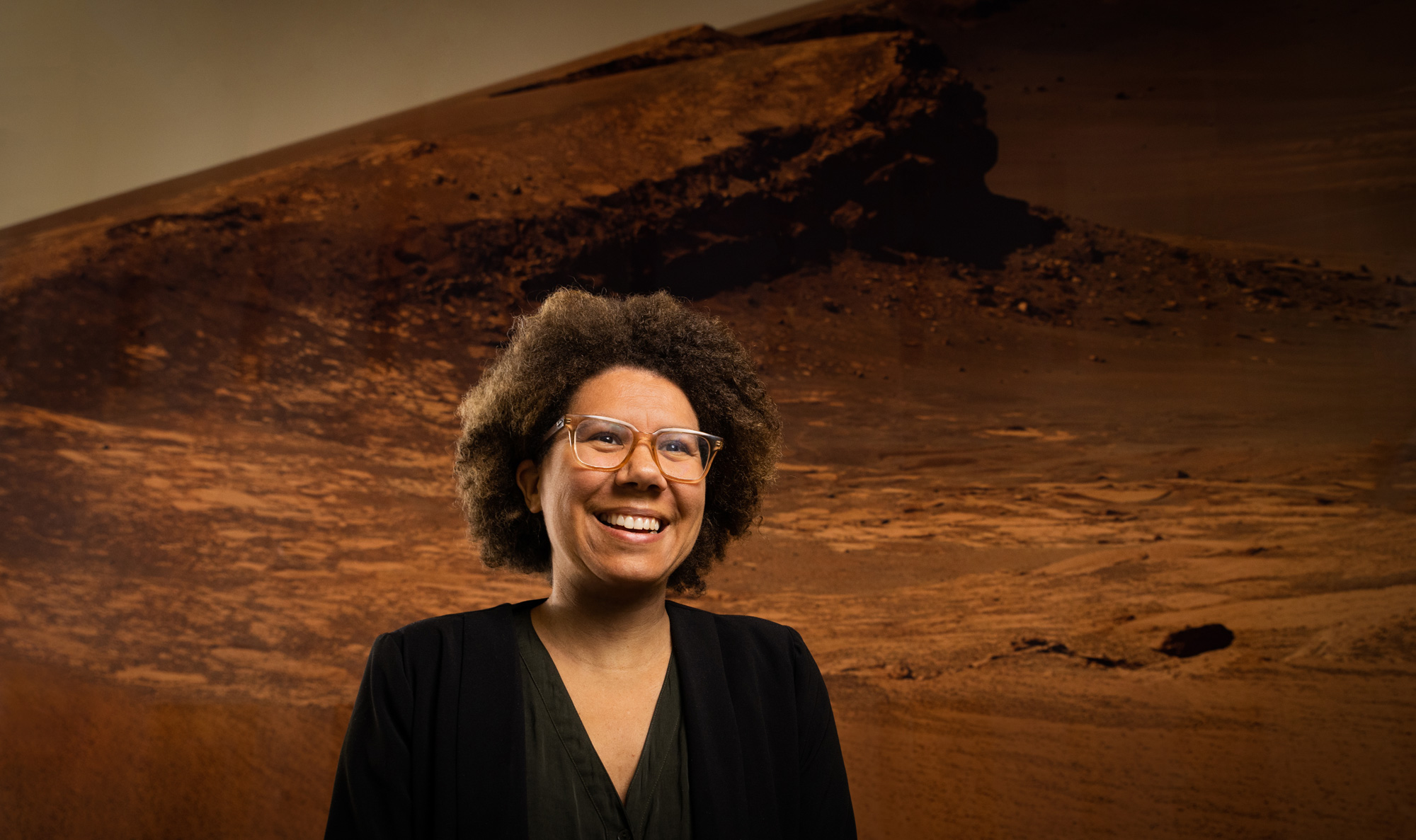 Cal Poly astronomy and physics Professor Louise Edwards in front of the photo mural of Mars surface displayed in the Baker Center for Science and Mathematics.  Photos by Joe P. Johnston.

A Cal Poly physics professor is spearheading an astronomy-related, data analysis research project that will contribute to new discoveries and understandings of stars and galaxies never seen before.

Edwards is the principal investigator of a four-year study that has received more than $1 million in research grants (about $1.12 million) from the National Science Foundation (NSF).

The study, awarded in June, directly partners with the Vera C. Rubin Observatory Project to investigate deep space regions of the universe. The massive Rubin survey telescope project is under construction in Chile with plans to begin operations in 2024.

A digital camera system designed by SLAC, the Department of Energy’s National Accelerator Laboratory located on the Stanford University campus, will attach to the new 8.4-meter telescope to view space objects more than 10 billion light years away from Earth.

While other types of telescopes can pinpoint objects farther out, Vera C. Rubin will document the deepest survey of the night sky ever recorded in expanse and field of range.

“This will be the ultimate Google Zoom of the universe,” Edwards said. “You’d have to build a wormhole and [or] travel at the speed of light to physically get to these outer reaches of the universe.”

The light-sensitive, charge-coupled device (CCD) imager that converts photons to electrons will capture the outer space images that will lead to new discoveries regarding the evolution and formation of galaxies, Edwards said.

Already, scientists associated with the project, including Edwards’ team, are building big data and computing cataloging systems that will help document the findings from the telescope as future images are captured.

“What scientists have been working on for the last couple years is a huge simulation of the universe, a computer-built universe,” Edwards said. “We get to explore that simulated universe using the tools we’ll need in two years when real data comes online. Along the way, we’re building testable predictions of the evolution of stars and galaxies using a dataset simulated to match the data coming off the new telescope.”

The impact of the study eventually will provide tools to best answer some fundamental questions, such as “What is the structure of the universe?” and “What does the map of the universe look like?” along with new information about light distribution and dark energy and dark matter (matter that doesn’t absorb or reflect light and is thought to make up a large majority of the universe).

The technology will bring in fresh views of the largest galaxies likely ever to be recorded, including ones 10 times the size of the Milky Way.

The project will collect data on more galaxies in its first year of operation than in the history of astronomy, with opportunities for the public to interact with and explore the observatory’s data.

That will allow us to do the largest, deepest survey of the sky that humans have ever done.

“That will allow us to do the largest, deepest survey of the sky that humans have ever done,” Edwards said. “What this project is about is getting all together to work as a community of scholars to learn how to deal with this data. It’s a huge survey with terabytes and terabytes of data (totaling more than 500 million gigabytes) and not something you can simply put into your own computer.”

Edwards and her student team members are collaborating to create computer codes using Python, a high-level programming language, in Jupiter Notebook that best simulates what they expect to view in the form of galaxy mass, numbers of stars and differentiations between blue stars (containing hotter compositions) and red stars (cooler compositions).

“We’re learning some astronomy together,” Edwards said. “We’re learning what’s available in the data that will be catalogued when the real data comes along. Because when it comes back to us, it’s going to have literally millions of galaxies.” 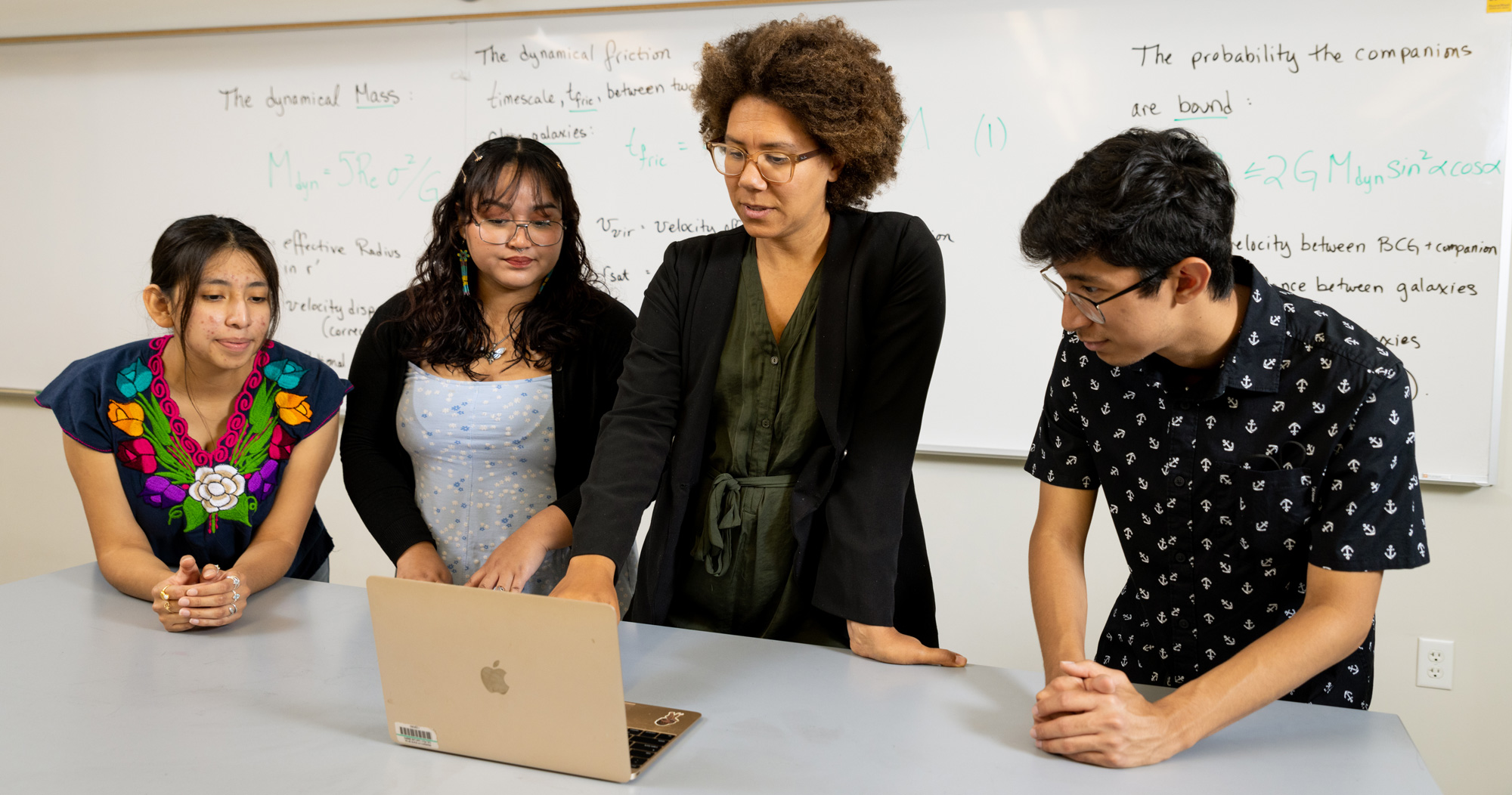 “I advertised for the research positions and received about 30 responses from students from various majors and backgrounds, including mechanical engineering, physics and students in the Cal Poly Astronomical Society,” Edwards said. “At the end of the day, I thought it would be really great to combine a couple of physics majors, who have a physics way of thinking about astronomy, with a couple of engineers, who have really awesome computing skills.”

Research assistant Ruano, a Cal Poly aerospace engineering student and president of the Cal Poly Astronomical Society, said that she grew up in East Los Angeles, in Montebello, where she rarely saw stars.

“I do remember always seeing the moon, and I’d always be curious,” Ruano said. “It wasn’t until middle school and high school that I started getting the gist for astronomy and how crazy it is that there are these objects so far away. So that’s how my astronomy passion started. Once I came to Cal Poly, my interests just grew.”

Puga said that he has faced hurdles to navigate the challenges of writing astronomy-related computer code, seeking Edwards’ guidance when he gets stuck.

“I just struggled through some of this code,” Puga said. “I like trying to learn it. But Professor Edwards is also always there because she encourages us to ask her questions.”

At Cal Poly, Zhang’s interest has continued to grow through classes and a part-time job at Cal Poly’s Observatory, as well as his photography of the night sky, a side hobby.

“I took a class with Dr. Edwards about stars and galaxies,” Zhang said. “And in that class, I was just really awestruck and captivated by the way that she describes how galaxies merge with each other. Once she told me that she was doing research, I had to jump in.

"Doing research, we get to take all that knowledge from class and then put it into practice and study a very specific part of why galaxies merge," Zhang concluded.