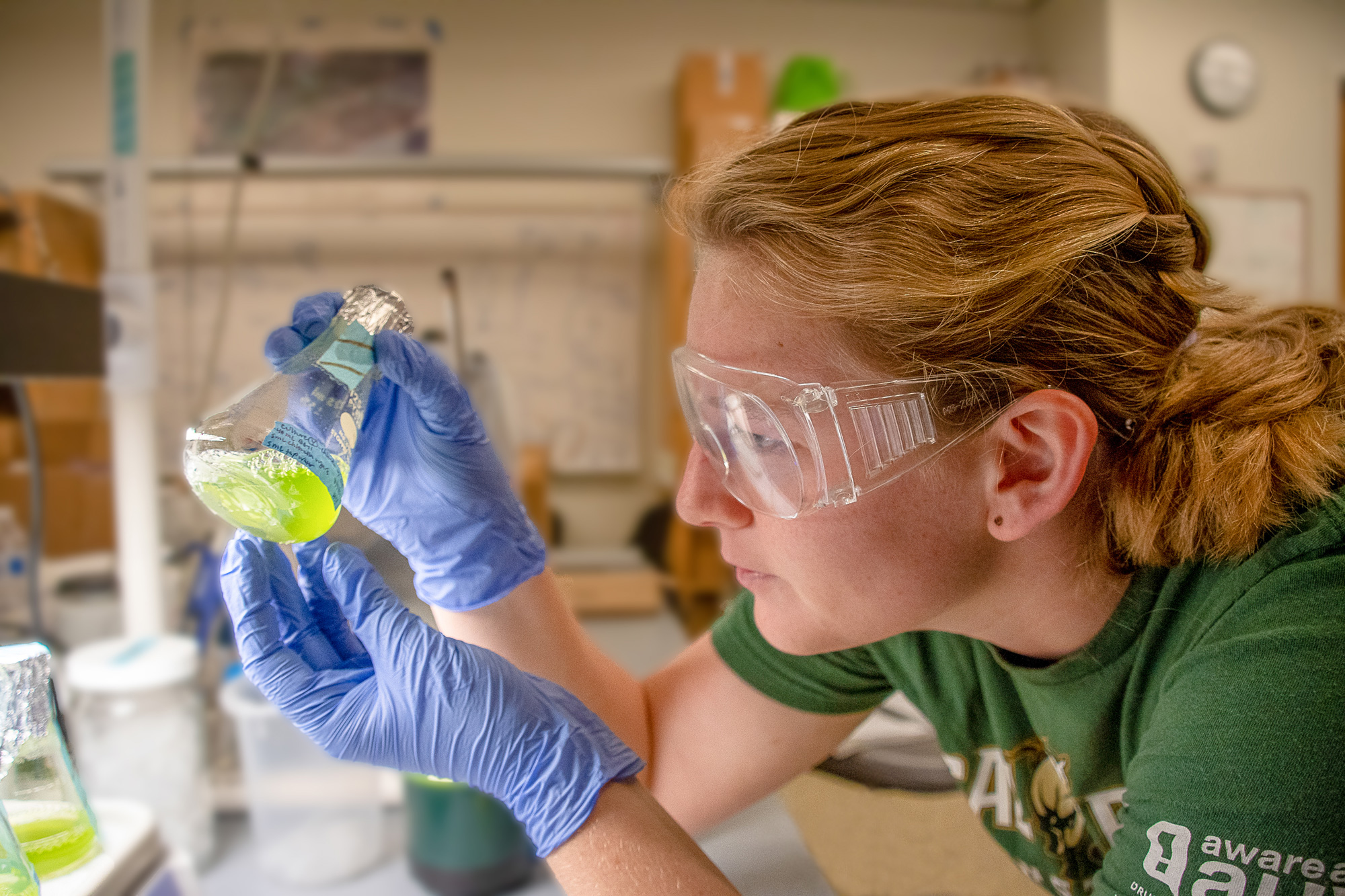 Bio student works with alumni-founded company on device to capture carbon from the atmosphere.

Haley Edwards has learned through research as a Cal Poly biological sciences undergraduate to keep asking questions when she encounters stumbling blocks.

Even if she doesn’t find the solution through her process right away, the information gathered helps to form a better understanding of the science.

“In class, you generally have clear direction and answers, whereas research is a lot more challenging because you have to figure out what you don’t know,” Edwards said. “And then you have to figure out what you should be asking when things aren’t working out as you expect, which is not a skill that I had before this. But I’m definitely working on it.”

Extraction Design, made up of five Cal Poly alumni who graduated between 2017 and 2019, created a device using a resin material that effectively absorbs and stores carbon dioxide.

Among the company’s visions for product application is to effectively reduce emissions into the atmosphere and help cultivate algae, feedstock and liquid fertilizers, all of which are aided by various forms of dissolved carbon.

Our hope is to see the climate mitigation efforts realized and to provide a path to start actively reducing CO2 in our atmosphere.

“Our hope is to see the climate mitigation efforts realized and to provide a path to start actively reducing CO2 in our atmosphere,” said Extraction founder and CEO Megan Skilling (Architecture, ’17). “The need for carbon capture technology is more evident now than ever. We are excited about the opportunity to make a real difference in the world.”

The Cal Poly research is studying potential ways of aiding the growth of algae, which thrives in aquatic environments in a liquid solution by infusing trapped carbon from the Extraction Design device.

If implemented on a large scale, which would take further research and development, a carbon-infused algae enhancement could help reduce greenhouse gases in the atmosphere and have commercial benefits. 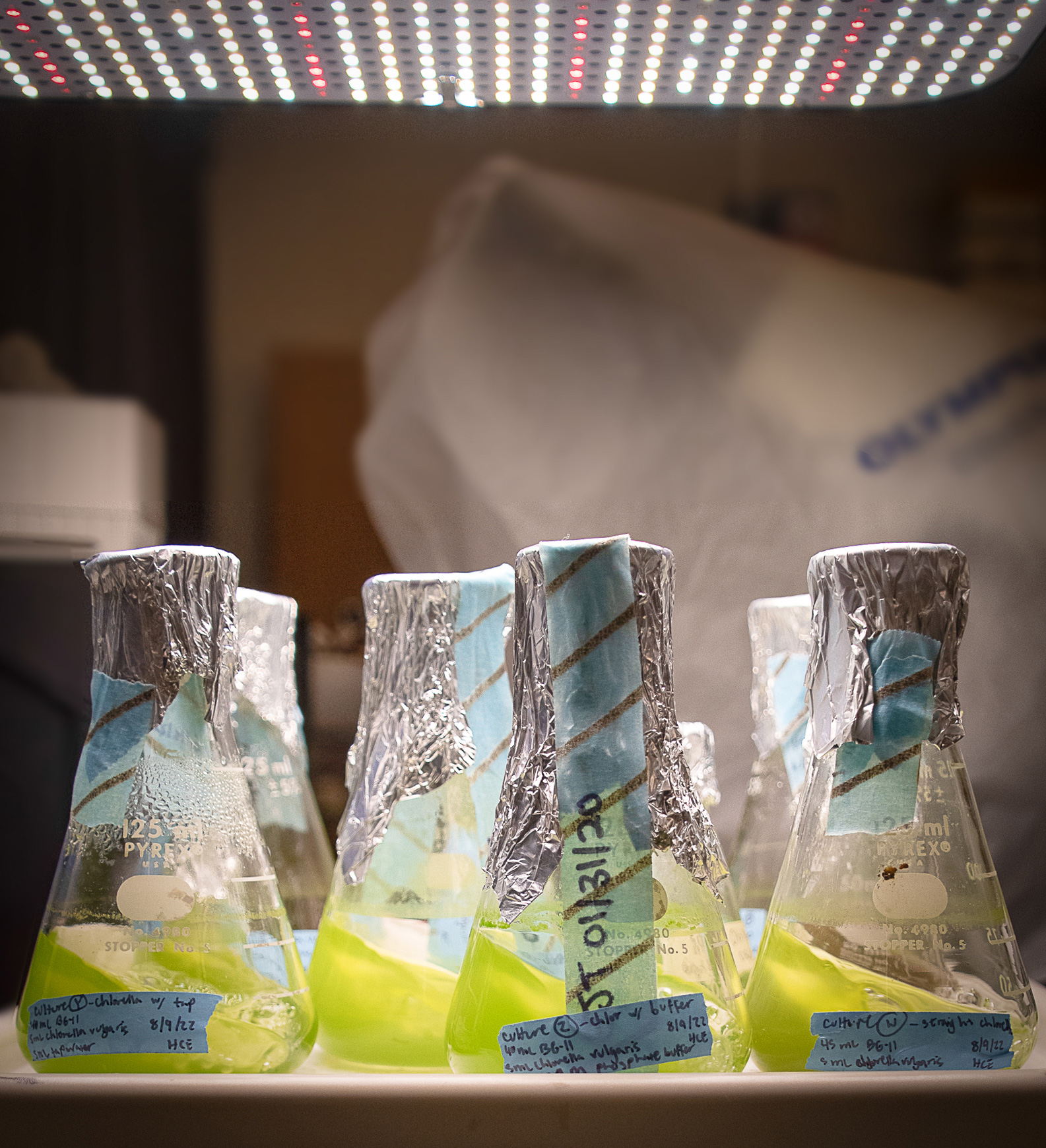 “The problem of what to do about all the carbon in the air is so big that it’s important for different people to be trying to solve that problem in different ways,” Keeling said.

Globally, scientists also are exploring how algae might be broken up for use as biofuels and as an alternative to fossil fuels.

Edwards, a biological sciences major from Irvine, California, previously conducted some field biology studies at Cal Poly and analyzed samples. She grew to enjoy lab work and sought out Keeling who connected her with the algae project.

Edwards’ workspace reveals a collection of Erlenmeyer flasks and vials of solution growing clumps of algae. Flasks jiggle back and forth on a vibrating shaker to stimulate growth.

Edwards has been able to hone her problem-solving skills, which will help in her planned future career as an obstetrician.

Her current challenge is to try to figure out how best to limit the amount of carbon that escapes when transferring it from its stored space to use as fertilizer for algae.

The carbon captured by the Extraction Design resin material is released into liquid solutions contained in flasks used for algae fertilizer. But off-gassing is a challenge as carbon exchanges between air and liquid form within the contained flasks.

“Storage is a huge problem because gas wants to be gas (and thus escape the liquid solution),” Edwards said. “It certainly has been a learning curve to work through the logistics of this project.” 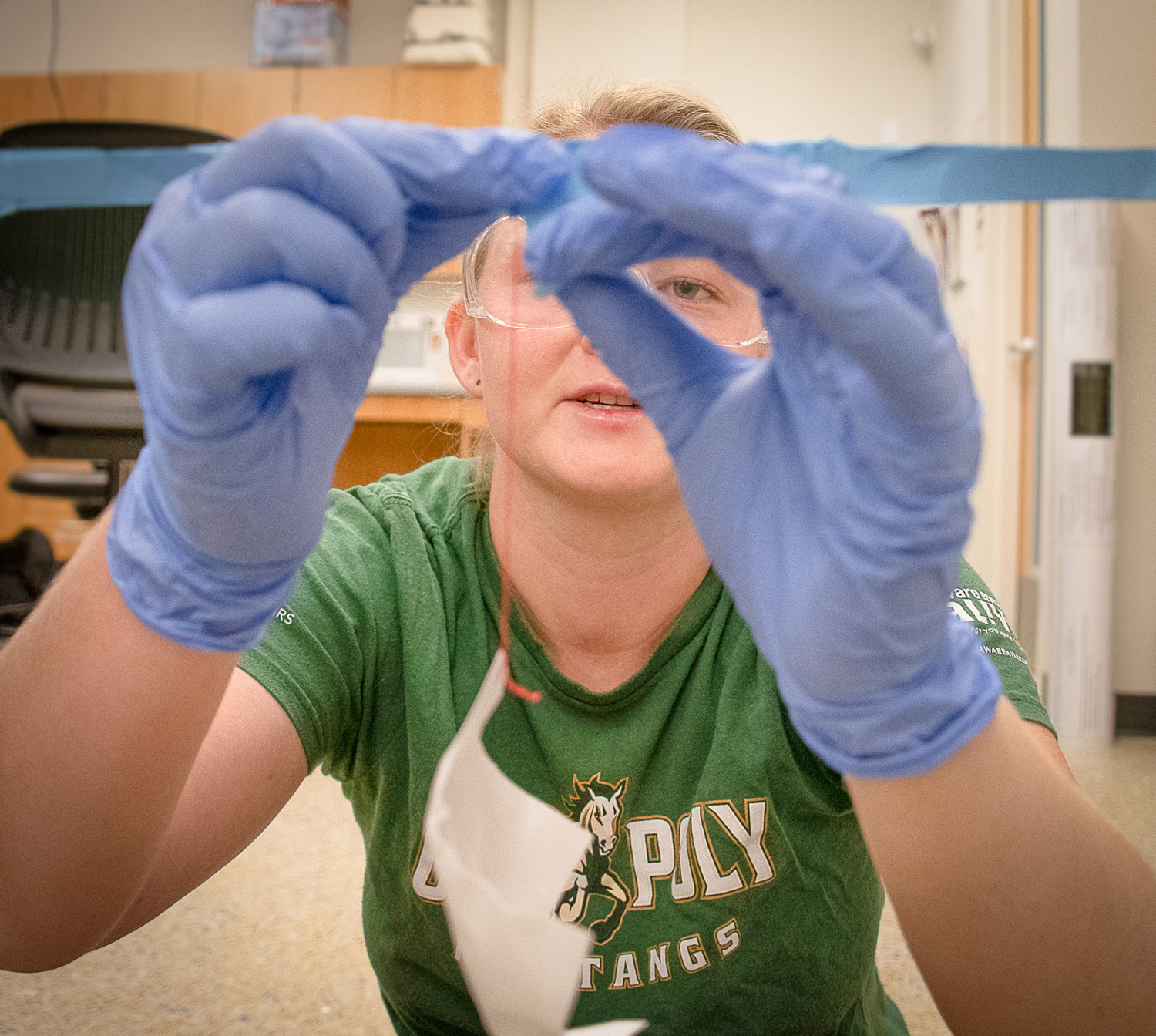 One potential fix is to add buffers, such as phosphate ions, which prevent the solution from becoming more acidic as the carbon dissolves. Keeping it more basic — versus acidic — helps the carbon stay in solution.

“I’m playing with different chemical buffers that hopefully will prevent the carbon from off-gassing as quickly,” Edwards said. “I need to figure out how to get my buffer to hold without killing or stunting the algae growth.”

Edwards said the project will require additional time and coordination, but the learning experience has helped her thus far.

“I think what will be applicable for me is the communication and collaboration aspect of it,” Edwards said. “I’ve really gotten to learn to talk to people of all different backgrounds about the project or about different applications or related projects. And I think those communication skills are going to be very, very useful.”

Skilling, said the Keeling Lab “is the perfect place to help us test the feasibility of this application.”

The Extraction Design team, led by Chief Science Officer Christian Vian (Chemistry, ’19), recently applied for National Science Foundation funding to continue research and development of the carbon capture device with the hope of commercializing it.

“Once we have successfully brought this technology to market and scaled it successfully, we will look to solve future environmental challenges and increase public awareness on environmental issues and our proposed solutions,” Skilling said.